Thanks for tuning into episode 22 of The Understand Photography Show!

To watch the video replay now, watch it now on YouTube:

The show is now available as a podcast on iTunes!! Please do us a HUGE favor and leave us a rating and review! We are trying to reach more photography enthusiasts on iTunes and we only have a short few more weeks to do so! Your help makes a huge difference! 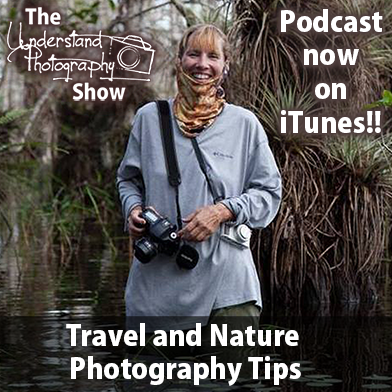 To hear this episode as a podcast on Soundcloud, click here:
http://www.soundcloud.com/understandphotography

Here are the show notes for episode 22 of The Understand Photography Show:

A camera support system is something that holds your camera.

Why not just hand hold your camera?

What kinds of supports are available?

Tripods consist of only the legs. The more sections a tripod has, the more joints, and therefore the less stability. The head is a separate part from the tripod.

What should we look for in a tripod?
– The ideal tripod would be lightweight, rock solid and inexpensive.
– The reality is that we can pick any two but not all three!

Tripod legs are constructed of the following materials:

What else should I look for when buying a tripod?

Clean the sand from your tripod with a garden hose or in the shower. Take a towel and wipe it off. Don’t lubricate it unless the manufacturer specifies.

“If you really love your tripod, shower with it!” – Joe Fitzpatrick 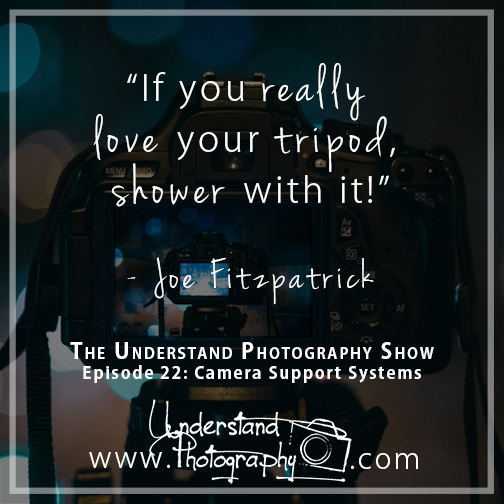 So I can just buy a tripod, attach the camera, and start shooting, correct?

Most tripods do not include the tripod head. Some tripods and heads are sold pre-assembled. Some are very low quality, but some are mid-range where the manufacturer makes the ball head and legs. Makers who make both tripods and heads often have both packages and bare tripods. Buying the tripod and head is generally best so you can get exactly what you need You need to know whether the ball head in the package is the one you want. You can mix and match betweem manufacturers.

To put the head on the tripod legs, there is a screw at top of tripod (there are 2 standard sizes, US specs, not metric). The ball head has a thread and you simply screw it on, but you need to be strong so that it’s tight! Some tripods have set screws undereath so that the head wont come loose when you’re panning.

For new but serious photographers who are not rich but want something good, you will typically have to spend about half of what you spent on your beginniner camera on the head and tripod.

There are two basic types of heads for still photography: ball heads and pan/tilt heads.

Are there other types of heads I should consider?

To complete the camera support setup, you have to have the tripod, then head/ballhead. You also need a tripod plate which fits into a clamp on the head to allow easy attachment and removal of the camera.

Joe’s favorite ball head is the Sirui KX series. His tripods are all Manfrotto, except for the ancient Vanguards.

Small tabletop tripod: Joe’s favorite is the Manfrotto Pixie, which stands about 4″ and has a little ball head. It is great for travel with a light camera, such as a 4:3 camera or starter DSLR with a kit lense. Joe uses it with his Panaxonic LX100.

Gitzo makes super light tripods, most of which are carbon fiber. One collapses really small. The Manfrotto middle-align tripods are less expensive. The inexpensive tripods (such as from Best Buy) are not sturdy, but you can use for flash for product photography in the studio, for example.

Jobo makes small tripods with flexible legs that can bend to go around trees and obstacles. Stick with the Jobo brand – the cheap ones are useless and fall apart.

You can attach a long lense to your tripod for balance, which is attached with a tripod mounting ring. This makes it easier for the ball head to get a good grab.

“The longer the lens, the more likely you are to have motion blur from shutter shake.“
– Peggy Farren 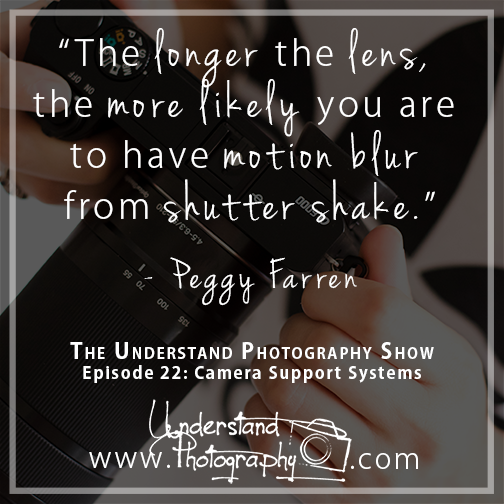 Beanbags are great for travel and are lightweight when empty. When you arrive at your destination, buy a couple of pounds of beans and fill the beanbags. Set them on whatever surface you have and lay your camera on the beanbag.

Put your name on your camera equipment!